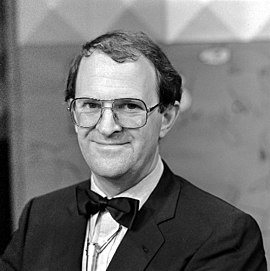 Wikipedia Source: Harry Bannink
Harry Bannink was a Dutch composer, arranger and pianist. He wrote over 3,000 songs. Bannink studied at the Royal Conservatory in The Hague, receiving his degree in 1946. He started his musical career in the late fifties, when he joined a small dance-orchestra as pianist. His compositions for the play Het staat u vrij where his first works for the theatre. Later he would write music for lots of songs by Wim Sonneveld, Wieteke Van Dort and especially Annie M.G. Schmidt. . He wrote music for many Dutch TV-shows, including Ja zuster, nee zuster, ?t Schaep met de 5 poten, Sesamstraat, and De Stratemakeropzeeshow. Since 1973 he worked with Edwin Rutten on the weekly childrens TV show De film van ome Willem and writer Willem Wilmink, with whom he wrote a lot of songs for the Dutch childrens education program Het Klokhuis.