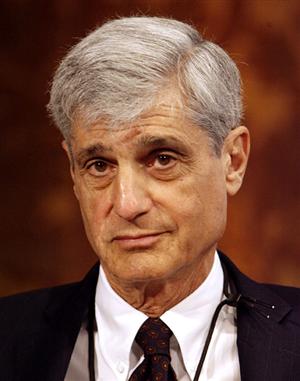 Wikipedia Source: Robert Rubin
Robert Edward Rubin is an American lawyer, former cabinet member, and retired banking executive. He served as the 70th United States Secretary of the Treasury during the Clinton administration. Before his government service, he spent 26 years at Goldman Sachs, eventually serving as a member of the board and co-chairman from 1990 to 1992- Rubin oversaw the loosening of financial industry underwriting guidelines which had been intact since the 1930s. His most prominent post-government role was as director and senior counselor of Citigroup, where he performed ongoing advisory and representational roles for the firm. From November to December 2007, he served temporarily as chairman of Citigroup and resigned from the company on January 9, 2009. He received more than $126 million in cash and stock during his tenure at Citigroup, up through and including Citigroups bailout by the U.S. Treasury.