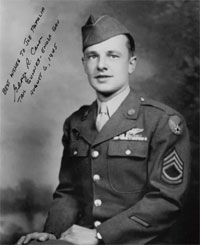 Wikipedia Source: Bob Caron
Technical Sergeant George Robert Bob Caron was the tail gunner, the only defender of the twelve crewmen, aboard the B-29 Enola Gay during the historic bombing of the Japanese city of Hiroshima on 6 August 1945. Facing the rear of the B-29, his vantage point made him the first man to witness the cataclysmic growth of the mushroom cloud over Hiroshima.